Effect of Trade Agreements on Unemployment in Africa 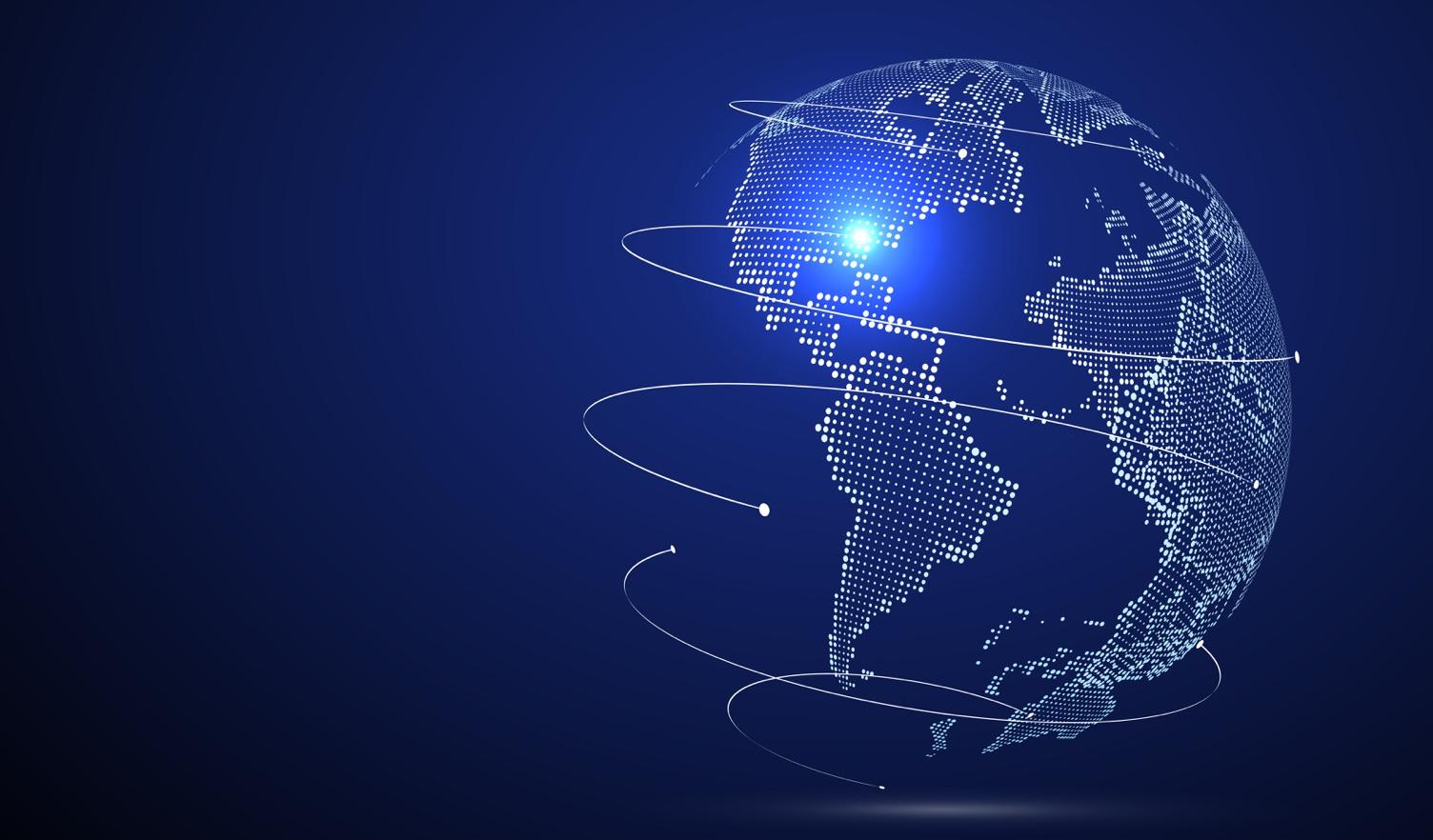 Exploring Trade as a pathway to employment creation in Africa

Both international and intra-African trade has led to many benefits in African countries, as previously discussed in an article by Eyecity. Such benefits include duty-free exports, elimination/reduction of tariffs, the operation of foreign companies and their integration through regional, continental and international trade agreements.

Though these benefits have improved the African economy, the question is if this development has led to employment creation in Africa. Can we say that more jobs have been significantly created as a result of trade in Africa? Identifying the relationship between trade and unemployment in Africa could truly answer the question of trade being a pathway to job creation.

Overview of Unemployment Trends in Africa

The current employment landscape in Africa leaves much to be desired, as unemployment in the continent is higher than other regions in the world, specifically for unskilled workers. This unemployment crisis has been worsened with the 2020 recession coupled with other lockdown measures associated with the COVID-19 pandemic. As of 2021, South Africa (34.4%), Namibia (33.4%) and Nigeria (33.3%) were the top three African countries with the highest unemployment rates. This is alarming as at least 1 in every 3 citizens of these countries are without a job, showing the gravity of the issue of unemployment in the continent.Looking specifically at the African youth population in 2016, one-third of the 420 million youth aged 15-35 were unemployed in 2016 according to the African Development Bank. In Africa, youth find it two times more difficult to secure a job compared to adults, though this varies country by country. This trend shows the need to provide more opportunities for African youth, if we are to reduce unemployment drastically.

A deep dive into youth unemployment data reveals that the female population are more likely to be unemployed (by 0.6%) than their male counterparts. A similar trend is noticed with the entire women population, evidenced with higher female unemployment rates for the majority of the Sub-Saharan African countries. This situation has worsened with the onset of the COVID-19 pandemic, as women had a greater risk of job loss compared to men as sectors with high female employment were mostly affected. With women facing greater challenges, support is needed to ensure that the quality of their lives are improved and income-generating abilities are sustained.

Unemployment is an issue that affects women, as well as other segments of the African population. Now, the question is if trade can be a solution to the problem of unemployment in Africa. The African Development Bank Group has identified intra-African trade as a way to reduce youth unemployment, with a similar effect for female unemployment, even at a greater level. The lowering of trade barriers between developed and developing countries, led to an increase of employment in the manufacturing sector of these countries. This was achieved as the trade liberalization and the use of developed information and communication technology in the global value chain enabled many large enterprises to implement production activities in developing countries. With greater ease of production abroad, foreign companies were able to operate within the continent and employ local labour for the running of their companies.

Though there has been job creation from international trade agreements, employment opportunities have also been generated through regional trade agreements within Africa. The regional export of agricultural produce from countries such as Burkina Faso, Mali and Niger has led to direct employment in those countries, as more people are engaged in the agricultural processes needed for various crops. This exchange of resources between countries provides citizens the opportunity to possess jobs as they play a role in the production value chain of the goods that may be exported.

Additionally, the  implementation of the AfCFTA agreement  is projected to increase the  number of workers in the public services, recreational services, trade and energy-intensive manufacturing sectors. It is expected that there will be an  increased output in female-labour intensive industries leading to an increase of  women’s wages in most African regions, improving the standard of their lives.  This increased domestic production by African countries will generate both income and job opportunities for its citizens.

Conversely, certain challenges can arise with the implementation of the AfCFTA agreement and others alike (regional or international). A major challenge might be the increased competition by foreign companies that may force local businesses out of operation. This could occur as the reduced tariffs could favor lower production costs, leading to cheaper prices which domestic firms may be unable to compete with. Another major threat would be the exploitation of labour in poorer African countries either through adverse working conditions or being forced to accept lower wages. To prevent this, it is important that clear rules and guidelines are agreed upon by all member countries to ensure the protection of its labor force.

Recommendations for Positive Effect of Trade Agreements on Unemployment

With the effects of COVID-19 on the unemployment landscape of Africa, regional and multinational cooperation is needed to ensure sustained recovery across the continent. During this pandemic, those in vulnerable employment, with informal jobs and low-skilled workers suffered greatly and are at a risk of falling into extreme poverty. With the exacerbated crisis of unemployment in the continent, necessary steps have to be taken to ensure that trade agreements have a positive effect. These steps are summarized in the diagram below: 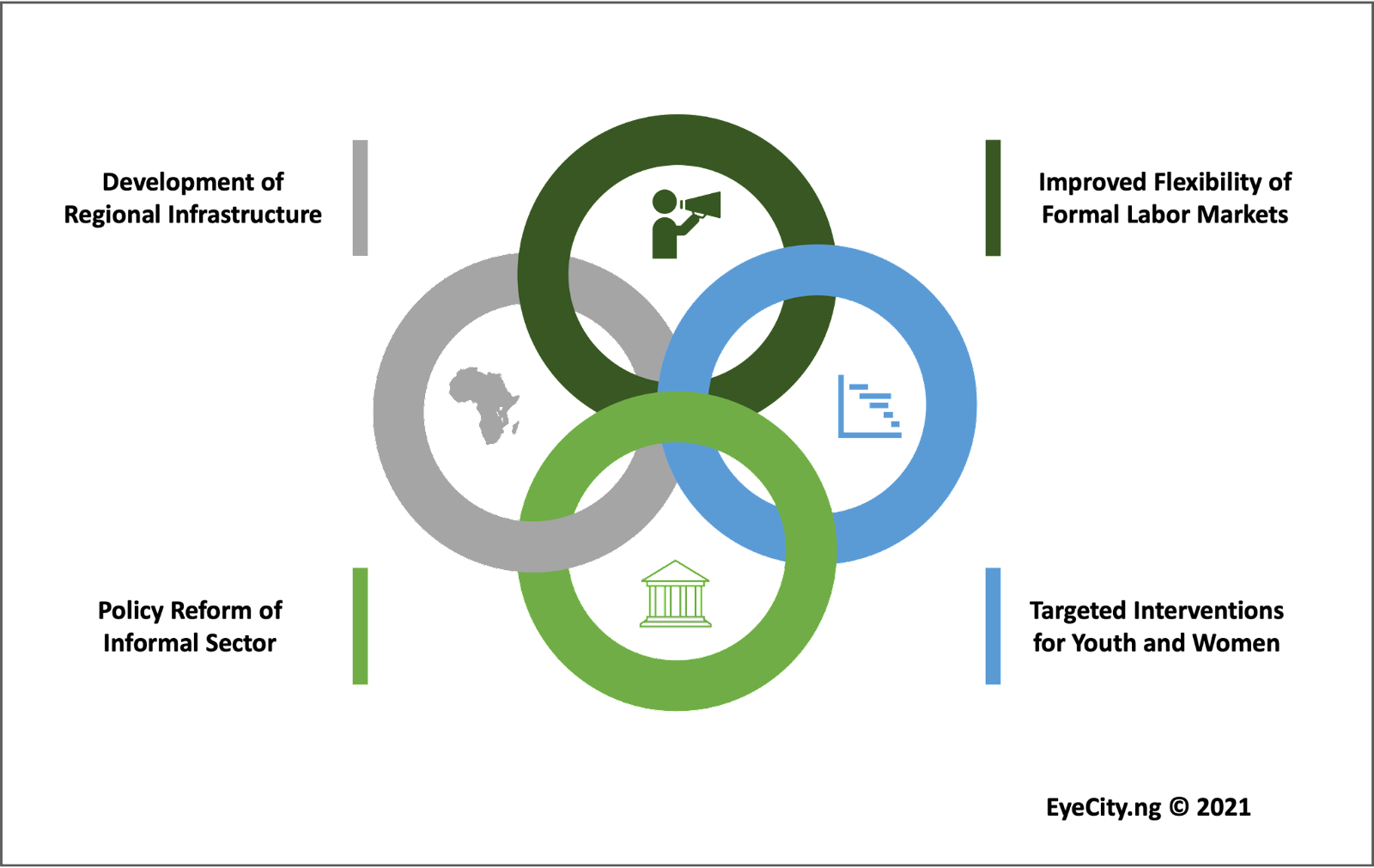 One measure that can be taken to ensure a positive effect is the development of regional infrastructure across Africa. Collaboration by member countries on related projects will aid easy access to the required facilities for trade at a low cost. In the same vein, domestic capital markets in African countries should be improved as this will strengthen the savings of citizens which can be mobilized for higher levels of domestic investment and spending. The infrastructural growth will improve both trade and unemployment simultaneously as cross-border trade is made easier and more job opportunities are created.

In addition, policy reform for trade in Africa should consider the numerous nuances and complexities of the informal markets continent-wide. This is important as 86% of employment in Africa is informal, consisting mainly of youth and women. An evaluation of existing informal markets, policies and support for citizens and the extent of benefit accrued by the informal sector needs to be conducted. The evaluation should be followed by actionable steps by the government and private sector to prevent the marginalization of the citizens in the informal sector who may be previously disadvantaged by a lack of ease of access in cross-border trade.

Another area of focus is the flexibility of the formal labour markets, needed to limit negative employment effects of trade.  Africa has high trade union density rates and collective bargaining rates in comparison to other regions in the world. The high participation rates from various organisational groups leads to the rigidity of the market as each group has a defined set of operations. Such limitations could cause issues with the reallocation of labour across sectors as trade development occurs in the country. Therefore, collaboration between existing unions across sectors within Africa will be beneficial in the review and reform of the structure of formal labour markets. This will provide a more favourable environment for trade in all countries, with a positive result of more employment.

Finally, targeted interventions for specific groups of the African population are needed to ensure change that closes current gaps. From research conducted, youth and women in Africa are faced with some inequalities that set them at a disadvantage. Though increased trade openness has the potential to curb unemployment, the reality of this occurring depends on how prior inequalities are addressed. The hope is that governments, International Donor Organisations (IDOs) and the private sector play their part in ensuring that African trade benefits all citizens.

This article was jointly written with Ememobong Etim

Omotayo is an International Development Expert with a demonstrated history of excellence in Project Management, Research, Human Capital Development, and Monitoring and Evaluation. He is passionate about enterprising Africa and connecting talent to opportunities

Damilola is an experienced management consultant with extensive experience in delivering projects for IDOs with a focus on economic development and innovative strategies. In her downtime, she enjoys solving puzzles and learning French in tiny doses.

Michael is an Education Technology enthusiast with extensive experience in the field. His recent projects include working with UNESCO Venice Office to develop an interactive training course for teachers in Italy.

Omotayo is an International Development Expert with a demonstrated history of excellence in Project Management, Research, Human Capital Development, and Monitoring and Evaluation. He is passionate about enterprising Africa and connecting talent to opportunities

Pola is an avid reader and passionate about anything education related. She is an English teacher and has taught students from diverse backgrounds, both privately and in the classroom. Her studies in English Language and Literature and International and Comparative Education have provided her with the necessary skills and knowledge to pursue a number of varied internships and positions, which have all contributed to a multifaceted professional approach. She recently interned at the Science Department of the UNESCO Office in Venice, Italy, where she contributes to the development and assessment of UNESCO-endorsed STEM related activities for science education.

#SocialMedia In The Classroom? We've got the answers here https://t.co/tVQuojkN1d https://t.co/uQtvDCJ1Rp6 years ago
#SocialMediaInTheClassroom https://t.co/LPzUZs4Yby https://t.co/bXl83pzZaH6 years ago
@eyecityedutech @Omojuwa @Ayourb @iaboyeji Please read and help share this article on the state of tech deployments in education. Thanks!6 years ago
Are Technology Deployments in Education Really Revolutionary? Pt 1 https://t.co/t6OKJCiA7S https://t.co/OKganCzp4I6 years ago
@AmiciSchool thanks for the RT!6 years ago
Follow Us
Copyrights © 2016 & All Rights Reserved by Eyecity EdTech Solutions Limited.
error: Please contact the admin for content use.
%d bloggers like this: